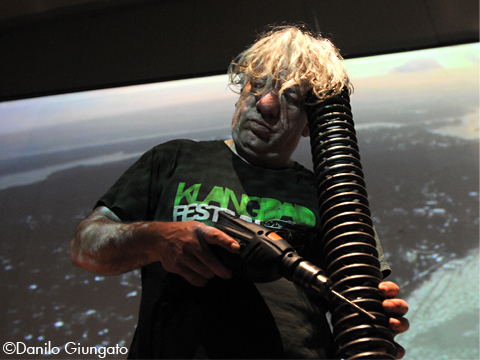 Hans Joachim Irmler is the founding member of the krautrock legend Faust, inventors of industrial rock.
FM Einheit is a former member of Einstürzende Neubauten and a recognized industrial percussionist.

FM Einheit was a key member of the industrial noise band Einstürzende Neubauten until he left the group in the mid-90s (‘boredom’ was one reason for leaving, he says). Claiming to hear things other people wouldn’t notice, he is always looking for particular sounds to fit his ideas and he usually finds them by behaving ferociously with industrial construction elements and various tools and devices. Einstürzende Neubauten concerts were parades of custom-made instruments and today, FM is a radical representative of this approach, collaborating with different people on concerts, theater and radio projects. Hans-Joachim Irmler, the other German legend here, is the keyboard man of Faust, who are still active and even preparing the release of a new studio album in 2010. The members of the mythical Krautrock band, even though experimenting with concrete sounds like E.N., rather fiddled with studio techniques and electronics, but both groups share the idea of building an idiosyncratic language beyond academic conventions.